The Chinese currency has appreciated significantly during the last 12 months against several currencies such as EUR and GBP, but also significantly against the Scandinavian currencies DKK, SEK and NOK. A sustained higher CNY exchange rate will make it even more attractive for Chinese companies to go abroad and do M&A’s.

The USD has over the last year appreciated against the EUR due to a better economic climate such as a lower employment rate, higher economic output, and a tighter monetary policy. As the CNY is semi-pegged to the USD, while the DKK is pegged to the EUR, the higher CNY/DKK exchange has mirrored that development.

However, the CNY has actually appreciated more against both the SEK and NOK than the DKK during the last year, while the CNY also has improved against the GBP. 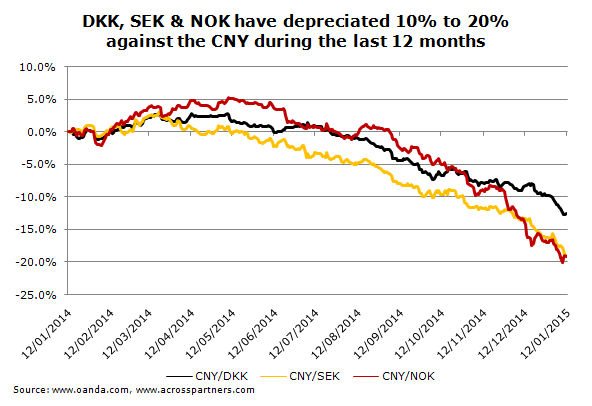 As the graph clearly shows, the Chinese companies will get a lot more bang for their buck if they go on a shopping spree across Scandinavia.

The overall picture is now a much stronger CNY compared to most currencies in Europe and if this will be sustained, it will improve the Chinese companies’ capability to go abroad and acquire European companies with the aim of expanding sales channels in Europe or acquiring technologies or brands to bring back to the Chinese market.

As shown on the graph below, the CNY is now at its strongest level against the Scandinavian currencies for at least 5 years and probably at its all time strongest level. 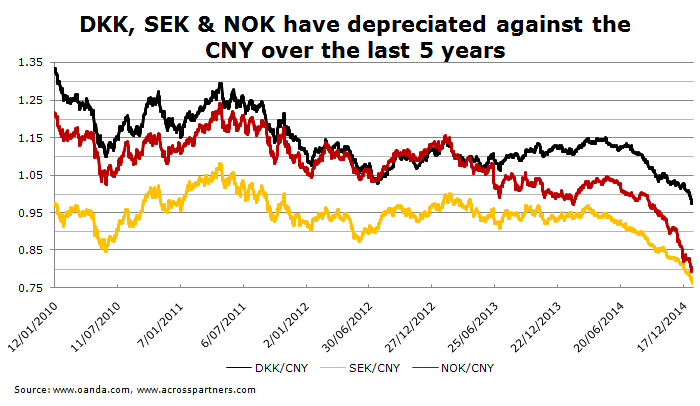